Lunchtime News Briefs: A Hybrid you WILL Want, and that Greenpeace WILL Hate!

Ok so today's post is all about Ferraris. Why? Why not? Seriously though, I'm an Italian male, and the three most important things to any Italian male are, in order: 1) Jesus Christ, 2.) Our Mothers, 3.) Ferrari. And to be fair, the order often changes, depending on the day of the week. And this is my blog, so I'm gonna talk about what I like.

In all seriousness however, Ferraris are making news. Look below: 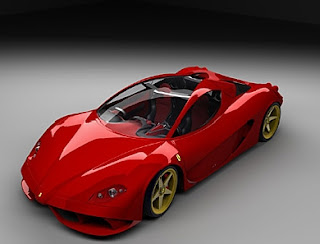 That is allegedly the new Ferrari F70 (take the picture with a grain of salt, there's over a dozen "official" F70 concept renderings). This is going to be the new Enzo. It follows a nearly three decades old trend now, to name the "halo" or baddest of the bad, Ferraris after anniversary's in the company's history. There were of course the F40and F50, and until the very end, the Enzo was referred to as the F60. This new replacement, barring another last minute name change, will be the F70.

While the design is still up in the air a bit, the drivetrain HAS been confirmed. Its a 7.3 litre V12 that will produce 800bhp! It is a further evolution of the beastly 6 litre (originally) V12 that powered the Enzo, the FXX, the FXX Evolutione, the 599 GTB, the 599 GTO, and the 599XX among others. But, are you ready for this? Its a hybrid! Ferrari has attached their KERS (Kinetic Energy Recovery System) hybrid drive, which was originally developed for F1, to the engine.

Short answer on how KERS works, as you break, heat and kinetic energy charges a battery that power an electric motor. On the drivers command, (AKA the push of a button) the electric motor activates, giving the gas engine more power. Basically, its electric nitrous, but it recharges itself! Ferrari have stated the F70's KERS will produce an additional 120bhp, so you have a 920bhp hybrid!!! It also has variable inlet/outley piping lengths and multiple spark combustions to help save gas. Overall its pretty trick and the best part is, Ferrari claim it gets 40% better mpg than a "comparable" gas engine. Double win.

This is huge folks. A halo Italian supercar has to have a V12, all the big ones did, the F50, the Enzo, the 250 GTO, the Miura, the Diablo, and more recently the FXX and Reventon. Not to mention the Zonda. (The F40 and 288 GTO did not posses V12s, but they were special exceptions) Trouble is, V12s are expensive to produce, and they GUZZLE fuel. They basically burn $100 bills out the back. Most governments are cracking down, and want them put out of business. Lambo has ditched their legendary V12, and Ferrari was focusing on V8s for a while, but this changes everything. A hybrid V12? OK go ahead and ban it, try to ban a hybrid, you can't do it. And while I doubt you'll qualify for the hybrid tax break (hell I'll bet a dub its the first hybrid ever hit with a gas-guzzler tax), it will allow the halo car to survive. And thank God for that.

Other facts: less than 500 will be built (who knows when), it will have all the F1 team goodies on it (Traction control, launch control, 7-speed double clutch gearbox, e-diff, KERS) and will probably be AT LEAST $1,000,000. It also will most likely not try to wrestle away the title of "worlds fastest production car" away from the Veryon SS, but damn I want one anyway.

And to kill the bright clouds of happiness I just posted, here's pictures of an abandoned, yes you read that right, Ferrari Enzo: 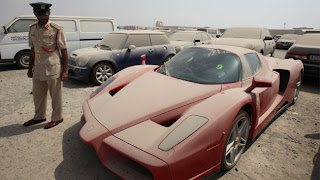 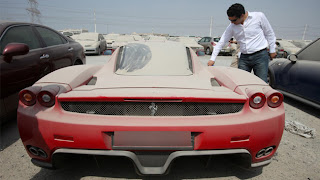 As you can see, its been sitting in an impound lot for over two years, and was to go to government auction. Where would such a crime against humanity such as this occur? Dubai, of course! Ah yes Dubai, where Supercars are so bloody common people ditch them, and the cops leave them UNCOVERED IN THE DESERT FOR TWO YEARS! Why? Because, yes they really aren't anything special down there. Seems a British playboy ditched the car after fleeing his traffic fines, and never came to get it. Sound strange? It is. Two days before the auction (where the car was expected to pick up over 1.2 mil for the Dubai government) INTERPOL seized it as being stolen. So know its sitting in some other lot somewhere. Hopefully they covered it........
Posted by Wallio at 12:24 PM